Award-winning Nigerian songstress, Simi has joined the league of celebrities who reprove the activities on social media, as she said she wants to leave all of the platforms at least five times a day.

Simi took to her Instagram story, to express her displeasure over the unrealistic activities of people dominating the social media platforms. According to the “Joromi” crooner, it is  sad that many do not see the wrongs in those activities.

“I want to leave social media at least 5 times a day. Most of the things I see just seem so fake and noisy and unnecessary and fake and pointless and tiring and fake. I don’t even think people hate on other people because they hate them- I think they do it cos they’re hiding them from their real lives because let’s face it, nobody really gives a fuck. And then some people show you only the shiny parts of their lives. Some people just jump on any moving badwagon. Some people only believe in whatever the trend says they should believe in. It exhausts ke. Is it just me? Am I tripping?” 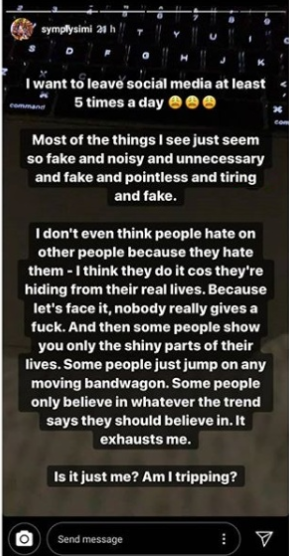 Peruzzi- “Nothing can break my relationship with Davido”